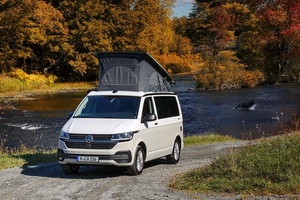 The Beach version of the California 6.1, with its new mini kitchen, is the winner of the European Innovation Award 2020. The prize was presented on Sunday evening at Europe’s largest holiday and leisure trade show: CMT in Stuttgart. It was the third high-calibre award for the new California 6.1 within the space of a week, having over the last few days also been crowned ‘Motorhome of the Year 2020’ and won the ‘Connected Car Award 2020’.

The European Innovation Awards were initiated by German publishing house DoldeMedien. On the jury were journalists from 17 European motorhome, caravan and camping magazines as well as bloggers from the caravaning sector. In light of the competition’s international slant, the award is especially significant for Volkswagen Commercial Vehicles. The California 6.1 Beach won in the category ‘Target Group Focus’. Factors evaluated here are vehicle concept or innovative components that have been specifically designed for selected target groups.

The line’s base model won through on this front against eleven rivals. Raymond Eckl, chairman of the jury and editor-in-chief of ‘Camping, Cars & Caravans’ magazine explained the reason for their choice: “Volkswagen Commercial Vehicles is aiming with the California Beach to offer multi-functionality at under 3.5 tonnes. With a completely redesigned, cleverly made mini kitchen which can be folded in and out, the California Beach with a 3-person bench seat and two individual seats in the back can be turned into a 7-seater – despite the kitchen!” The jury’s reasoning underlines the great variability of the California Beach 6.1, which can equally be used as an MPV or motorhome. 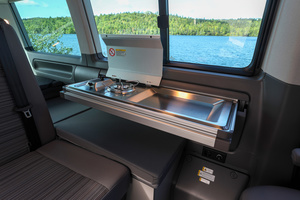