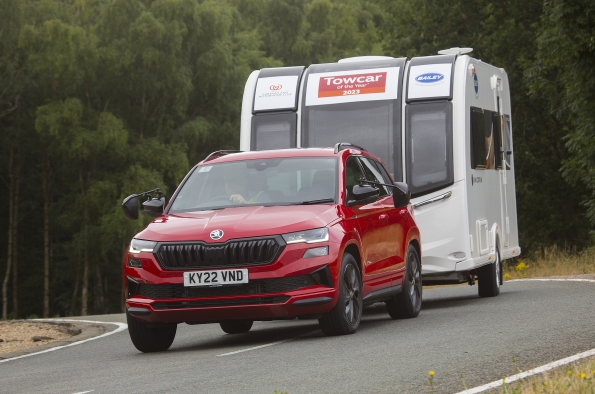 The ŠKODA Karoq Sportline 2.0 TDI 150PS DSG 4×4 SCR has won this year’s overall trophy and also triumphed in the Caravan Weight 1400kg – 1500kg Category and the Family Towcar Category in the 40th Caravan and Motorhome Club Towcar of the Year Competition.

The ŠKODA Karoq Sportline 2.0 TDI 150PS DSG 4×4 SCR has long been a favourite with families looking for a practical capable SUV.  The 2023 edition, a recently refreshed model complete with new styling and technology and a 2.0-litre diesel engine with four-wheel drive, claimed Class and Category victories as well as the overall title.

Twenty four entrants were put into caravan weight categories – rather than being listed by price – to make it easier for buyers to know which cars could tow their caravans. Cars were entered into classes using their 85% kerbweight figure or by their towing limit, whichever was the lower. The competition had six weight classes, two Family Towcar categories as well as Electric and Plug in Hybrid categories.

Caravan Weight 1200kg – 1300kg: ŠKODA Enyaq iV 80X Sportline
The Enyaq iV offers a masterclass in current EV technology, exhibiting a smooth and ultra-refined character when towing.  An additional electric motor on the front axle makes the 80x four-wheel drive, and the extra traction while hitched helped both on twistier roads and the hill start.

Caravan Weight 1500kg – 1700kg:  Volvo XC40 Recharge Twin
The XC40 immediately scores well for being an EV with a high towing weight capability.  Sparkling acceleration, tidy driving dynamics, a roomy and well-laid out interior and a spacious boot, this is a worthy class winner.

Electric Vehicles:  Polestar 2 Long Range Dual Motor
Polestar impressed during its first ever appearance at this competition.  Its interior is a delight to sit in, while the Google-based information system is simple to use.  The Polestar 2 is astonishingly quick even when hitched, it’s composed, quiet and razor sharp to drive.

Plug-in Hybrids Vehicles:  Volvo V90 Recharge Plug-in Hybrid T6
A supremely comfortable towcar and primed for long journeys.  Performance is impressive and the interior is a masterpiece in style, comfort and intuition.

Nick Lomas, Director General of the Caravan and Motorhome Club said, “This year’s Caravan and Motorhome Club Towcar of the Year Competition was notable for the number of electric vehicles competing, and the EVs performed well against established petrol and diesel offerings.  Meanwhile, SUVs lined up against estates and pick-ups, and even a traditional MPV was fielded.  Leisure vehicle holidays are more popular than ever, it’s important that the Club continues to provide qualified and unbiased information to help all those who plan to tow to find the right towcar for their needs.”

Each car was put through its paces at the UTAC Millbrook Proving Ground near Bedford, which provides a variety of testing driving environments. Manufacturers were invited to submit for testing any vehicle that was capable of towing a trailer over 750kg and on sale on 1 October 2022.

The Club’s Scrutiny team thoroughly checked each vehicle before handing it over to the ‘caravanability’ and driving judges.

The cars were then hitched up to caravans ballasted to 85% of their kerbweight, or towing limit if lower. Using specialised apparatus the technical judges then measured the cars’ acceleration and braking capabilities. The car/caravan combinations were then passed over to the driving judges who set off around the UTAC Millbrook circuit to put the vehicles through their paces.

Judges then took the vehicles to the high-speed bowl to further assess their capabilities at speeds in excess of UK legal limits.  In the safety of a controlled environment, the judges could induce some instability at 60mph to see how the cars reacted. The vehicles were also put through reversing examinations.  All-important issues of driver and passenger comfort and visibility were also assessed.

The results of the competition were announced at the Caravan and Motorhome Club Towcar of the Year Awards ceremony, held at the Royal Automobile Club in London on 23 September. The awards were presented by British racing driver Mark Blundell.

Lomas continues, “As the UK’s premier event of its type, this competition supplies caravan owners with important information on potential new towcars.  During the exhaustive four-day test, the vehicles are taken on several hundred circuits of the Millbrook Proving Ground, consisting of many laps of the high-speed circular track and demanding alpine hill route.” 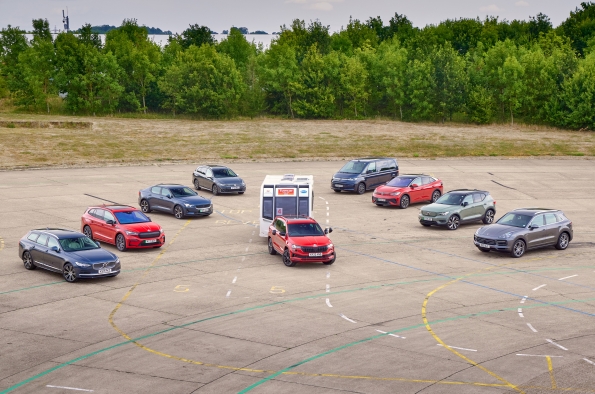