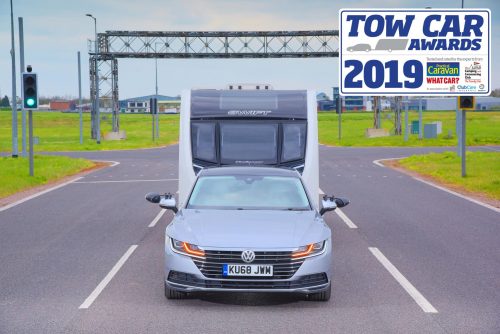 The results of the Tow Car Awards 2019, a joint project between Practical Caravan, What Car? and The Camping and Caravanning Club, saw petrol-engined cars as outright winners of two weight class awards for the first time, a new award category for the Best Plug-in Hybrid, and the competition’s first towing test of an all-electric car (the Jaguar I-Pace).

40 cars were entered, competing for nine awards, but only one could be chosen as the Overall Winner of the Tow Car Awards 2019: the Volkswagen Arteon 2.0 TDI 150PS Elegance DSG, which also won its 1550-1699kg weight class.

The cars are tested in groups according to their respective kerbweights (from up to 1400kg to 1900kg+), plus four individual awards: Best Ultralight Tow Car, Best Budget 4×4, Best Plug-in Hybrid, and a Fuel Economy Award.

Some cars seem almost unbeatable, such as the Skoda Octavia, which has now won the Up to 1400kg weight class for the sixth year, but this time with a 1.5 TSI petrol rather than diesel engine. Other regular tow car winners include the BMW 5-Series, winning the 1700-1899kg weight class again with the 520d Touring xDrive M Sport, and the Land Rover Discovery, which has won the 1900kg+ weight classes for 12 of the 13 years of Tow Car Awards competitions, this time with the 3.0 SD6 306hp HSE.

This year, for the first time ever, the Tow Car Awards had an all-electric car entered – the Jaguar I-Pace. A legal towing limit of 750kg restricts it to micro-caravans or small trailers so isn’t a viable option for the majority of caravanners yet, but the Jaguar’s pace and stability while towing were certainly cause for optimism about the future of electric vehicles as tow cars.

Individual reviews of all cars tested in 2019 (and archives of all those tested in previous years, back to 2007) are available at www.thetowcarawards.com.

The competition is grateful to welcome a new insurance partner, Club Care Insurance, this year which provided cover for the Tow Car Awards test programme, and also to the Swift Group, which, once again, provided a fleet of caravans. The caravans’ Al-KO ATC stability systems were disabled for the purposes of testing. Instead, they provided valuable data about the stability of each car and caravan combination.

Each car was matched to a caravan ballasted to weigh up to the recommended guideline of 85 per cent of its kerbweight, or its manufacturer’s maximum towing limit, if lower, and put through a series of challenging and dynamic tests at the Horiba-MIRA Proving Ground in Warwickshire. This includes high-speed stability, emergency lane changing and a hill start on a 1-in-6 slope.

Discussing the Tow Car Awards 2019, David Motton, tow car editor, Practical Caravan magazine, said: “Having tested 40 of the newest cars on the market, including our first time towing with a pure electric vehicles, the results of this year’s Tow Car Awards are really interesting and valuable for anyone choosing a car now, or in the future.”

“A coupé-style fastback wasn’t what we would have predicted to be chosen as the Overall Winner of the Tow Car Awards 2019, but it won because it impressed us enormously. It does all of the sensible, important things that we ask of a tow car, and brilliantly,” added David Motton.

Paul Jones, the Marketing and Communications Director at The Camping and Caravanning Club, said: “We are really proud to have started this awards programme in 2007. Since then, our rigorous testing schedule has generated a valuable library of more than 500 tow car test reports, which our members find invaluable when researching their next purchase – whether that’s a new tow car or a second-hand vehicle.”

Bailey of Bristol switches to 100% renewable ...