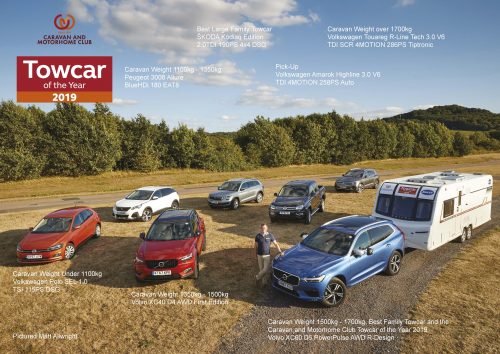 The Volvo XC60 D5 PowerPulse AWD R-Design has won this year’s overall trophy, and also scooped two category wins in the Caravan and Motorhome Club Towcar of the Year 2019 competition.

The 36th edition of the industry’s premier towcar competition features significant changes to previous years, driven by the Club’s desire to provide the most relevant information for those thinking about purchasing a towcar.

New for this year, vehicles were put into caravan weight categories – rather than listing them by price – to make it easier for buyers to tell which cars could tow their caravans. Cars were entered into classes using their 85% kerbweight figure or by their towing limit, whichever was the lower. The Club also introduced two new categories – ‘Best Family Towcar’ and ‘Best Large Family Towcar’.

The Volvo XC60 beat some very worthy rivals in the competition, claiming a well-deserved hat trick of titles. The Volvo took top spot in the new ‘Best Family Towcar’ category and the class for ‘Caravan Weight 1500-1700kg’ before clinching the overall title Caravan and Motorhome Club Towcar of the Year 2019.

The competition attracted 35 entries and each car was put through its paces at the Millbrook Proving Ground near Bedford, which provides a variety of testing driving environments. Manufacturers were invited to submit for testing any vehicle that was capable of towing a trailer over 750kg and on sale on 1 October 2018.

The Club’s technical team thoroughly checked each vehicle before handing it over to the ‘caravanability’ and driving judges.

The cars were then hitched up to caravans ballasted to 85% of their kerbweight, or towing limit if lower. Using specialised apparatus the technical judges then measured the cars’ acceleration and braking capabilities. The car/caravan combinations were then passed over to the driving judges who set off around the Millbrook circuit to put the vehicles through their paces.

Judges then took the vehicles to the high-speed bowl to further assess their capabilities at speeds in excess of UK legal limits. In the safety of a controlled environment, the judges could induce some instability at 60mph to see how the cars reacted. The vehicles were also put through reversing examinations. All-important issues of driver and passenger comfort and visibility were also assessed.

The results of the competition were announced at the Caravan and Motorhome Club Towcar of the Year Awards ceremony, held at the Royal Automobile Club in London on 21 September. The awards were presented by journalist and TV presenter Matt Allwright, who also spent time at Millbrook to see how the judging process was carried out.

Matt Allwright commented, “This was my second time being at Millbrook Proving Ground for the competition. It was great to see how the event continues to evolve in order to get the best independent information for car buyers. The testing is so thorough, the winners should rightly be proud of their achievements.”

Simon Howard, Marketing Director of Bailey of Bristol, which provides the caravans for the event, said, “Vehicle testing for the Caravan and Motorhome Club Towcar of the Year competition really is leading the way. We are extremely proud to have been supplying the caravans for testing for over 20 years.”