Putting female foresters in the frame 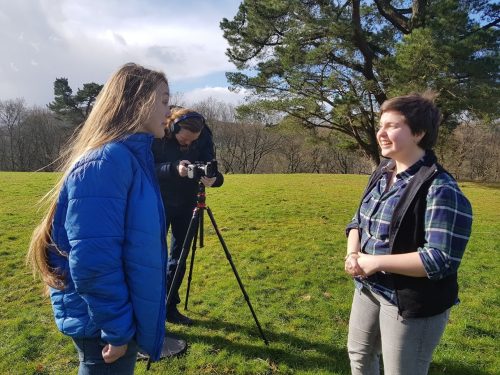 International Women’s Day (IWD) is being marked with a push for female foresters and the call to smash ‘it’s for men’ misconceptions.

National School of Forestry (NSF), based at University of Cumbria’s Ambleside campus, where just 20 percent of its students are women, wants a better gender balance and has helped with a film being released to mark the special day on 8 March.

Forestry graduate, Mima Letts, came up with the idea of showcasing professionals and students destined for jobs which she says are often misunderstood and very male dominated.

She set up Tree Sparks with the aim of igniting conversations and putting the profession in the public eye.

Currently working on the Chatsworth Estate in Derbyshire, Mima says she stumbled into her career by mistake on a UCAS search and now wants to ‘make positive things happen’ for all young people looking for a future with fantastic career paths.

She explained: “One of the biggest misconceptions is that you need to be a strong, bulky male to succeed. Backed by the Institute of Chartered Foresters and produced by Tree Sparks, the film #ILookLikeAForester shows there’s a place for everyone, especially women.

“I want to make sure they are not put off by showing a plethora of careers, from forest management to tree officers, Geographical Information Systems (GIS) and mapping roles, the list really is endless.

“I’m hoping to get my film across as many platforms as possible for #IWD2020 with a simple message, don’t just think about it, do it!

“Being able to study in the heart of the Lake District is a fantastic opportunity. Forestry is for everyone, men, women, older people and young. It’s a vast profession, but an extremely close-knit one.”

National School of Forestry senior lecturer, Mark Tomlinson, said perceptions of it being a career for men were wrong and there had never been a better time to choose forestry and woodland management.

He added: “Having a better gender balance has to be our aim as we go forward to meet ever growing industry needs. Trees have a significant part to play in helping combat the climate crisis. In Scotland, we are told 70 percent of the forestry workforce needs to be replaced in the next 10-years.

“Historically, we had the all-important Lumberjills working in forestry jobs during the Second World War. Since then, women have carved out remarkable careers from chainsaw-wielding craftspeople to forestry managers and leaders.”

He welcomed #ILookLikeAForester and urged potential forestry students to find out more on: