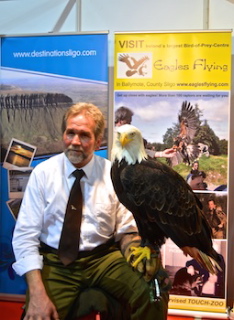 Foul weather and long dark nights. Summer might seem a long time away right now which is why it’s just the time to plan for vacations in 2015. Enter the Holiday World Shows in Belfast and Dublin. Held on successive weekends, the events showcased the best of what is on offer for the season ahead. As always there was also a distinct camping angle with a number of dealers and distributors of motorhomes, caravans and holiday homes taking stand space. Disappointingly though, there were no caravan exhibitors at the Dublin Show. Caravan Cruise Ireland’s Cathal Doyle and Paul White attended the two events to get a flavour of what was to be seen. Ireland’s leading motorhome dealer, Donaghey Motorhomes had significant presence at both show. Salesmen Gerry and Damian reflected on an air of optimism in the sector, reporting that orders of new vehicles are up. They said there’s also a shortage of quality used motorhomes at present, following on from the collapse of sales of new vehicles over the past number of years. A selection of vehicles from Hymer, Dethleffs, Autocruise and Swift were on display for stand visitors to examine. Proudly showcasing the first Wellhouse Leisure Terrier based on the Ford Transit Custom to be seen in Ireland was Christopher Magee of John Mulholland Motor Group, agents for the brand in Northern Ireland. He reported much interest in the well specified camper van which was awarded Campervan of the Year 2014 by Which Motorhome. From Bainbridge, Co. Dowm, Downshire Camping & Caravans had a selection of Elddis caravans on display. They reported a lot of interest from visitors in Elddis’ new Solid construction method. The company is also a dealer for Hobby. A first time exhibitor at the Belfast show was Nomad Campervans. The company was established seven years ago specialising in camper-van rental under the brand Bunk, a business that is continuing to grow successfully, and includes showrooms and workshops in Belfast and Dublin. The company is now also selling Volkswagen T5 conversions under the Nomad brand using Reimo parts that are TUV crash-test approved. A regular at the Belfast Show are sister companies Cookstown Caravans and LPC Caravans. A selection of Lunar, Swift and Compass caravans were on display. One of the largest exhibitors in both Belfast and Dublin was Thompson Leisure from Dromore. County Down. A range of Hobby, Rapido, and Elddis motorhomes, and Autohaus camper vans were available for visitors to see. As always there was an ebullient welcome on the ICCC stand, one of the friendliest clubs around. Johnny Bulger, Francie McGuigan and Stephen Downey were on hand in Belfast, while manning the stand in Dublin was John Burns. The specially equipped Dometic camper van, a regular sight at UK Shows, made an appearance at the two Holiday World Shows, showcasing the latest products from the specialist refrigeration and assessories producer for the mobile leisure sector. Adam Stewart of Gap Leisure Ireland, agent for Dometic on these shores, had his hands full fending off would be buyers of the one-off vehicle. Among products on display were a new drawer fridge for under seats, while a new manual awning is on the way from the company. Sexton and Darcy may be familiar names to Irish rugby followers, but flying the Irish Flag in a slightly different scenario were Elaine Sexton of Sexton’s Caravan & Camping Park in West Cork and Niamh Darcy of Morriscastle Strand Holiday Park in Wexford. Representing the Irish Caravan & Camping Council, the duo were extolling the benefits of holidays in Ireland on the Camping Ireland stand. From Newtownmountkennedy, County Wicklow, Smyth Leisure is one of Ireland’s leading suppliers of quality mobile homes. Managing Director Aubrey Smyth was on hand in Dublin to show visitors around.

The Ocean Race launches campaign for a Univer...

Clean Coasts and Irish Water are asking you t...

Fiat Professional stars in the Düsseldorf & ...
SCOTTISH DEBUT FOR 2 NEW WELLHOUSE CAMPERVANS Caravan of the future becomes a reality