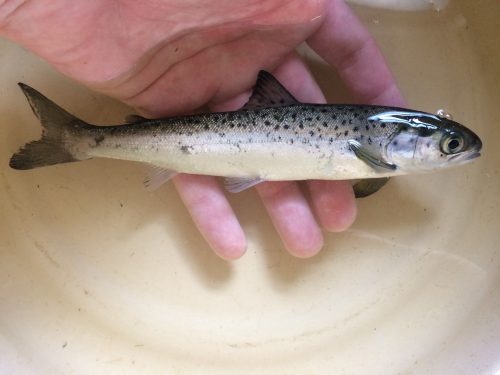 The route taken by young salmon (smolts) leaving the east coast of Ireland has been discovered for the first time. Inland Fisheries Ireland and Northern Ireland’s Agri-Food and Biosciences Institute have revealed findings which show young salmon leaving rivers on the eastern coast travelling northwards to leave the Irish Sea, rather than south and west to join salmon on the western coast. The research was carried out as part of the COMPASS project and funded by the EU European Regional Development Fund’s Interreg VA programme.

The new evidence was established after researchers tagged salmon smolts with coded transmitting acoustic tags in the Castletown and Boyne rivers in County Louth during the spring of this year. Three of these tagged salmon were picked up on listening devices in the coastal seas as they travelled northwards out of the Irish Sea towards the Atlantic Ocean.

One of the smolts was recorded in Scottish waters, some 80 kilometres north of the Inishowen Peninsula. This smolt had travelled an estimated 250 kilometres in just over a month, one of the longest distances recorded for a salmon tracked at sea en route to its feeding grounds in the North Atlantic. Two more salmon smolts were tracked as far as receivers located off the Northern Ireland coast, further confirming the northward migration of the fish through the Irish Sea.

Until now, it was unknown if juvenile salmon leaving Ireland’s east coast rivers headed around the North or South coasts to get to their oceanic feeding grounds. These first three tracked fish took a northward route from rivers on the east coast to exit the Irish Sea. These salmon also moved offshore quickly, behaving very differently from sea trout, which remained closer to their spawning rivers and swam closer to the coast and river mouths.

The tagging work was carried out by scientists from Inland Fisheries Ireland (Dr James Barry) and AFBI (Dr Richard Kennedy) who tagged and analysed the movements of 130 salmon smolts as they left their rivers of birth in the spring of 2019. This work was supported by a local angling clubs, including The Dundalk and District Brown trout and Salmon Anglers, who helped to install fish traps which enabled the tagging and release of fish. A network of acoustic receivers were moored to the seabed along the coast from Drogheda to the north east coast by researchers from IFI and AFBI, to track the tiny acoustic transmitters in the salmon as they migrated from the rivers to the open ocean.

This research is just one element of the COMPASS (Collaborative Oceanography and Monitoring for Protected Areas and Species) project, a transnational initiative which focuses on the coastal seas between Ireland and western Scotland. The project aims to deliver improved cross border environmental monitoring programmes, including research to support highly mobile protected species such as marine mammals, salmon and sea trout. This particular research package is investigating the success of wild salmon and sea trout as they migrate from river to sea, and examining where they travel to and how many of them survive before returning to Ireland to reproduce.

Commenting on the findings, Dr William Roche, Senior Research Officer at Inland Fisheries Ireland said: “As salmon populations are in decline across the northern hemisphere, we urgently need to establish their migration journey and identify any issues which may be negatively impacting survival along that route. This research marks an exciting milestone and it will play a critical role in supporting marine conservation efforts.”

Dr Cathal Gallagher, Head of Research and Development at Inland Fisheries Ireland said: “Salmon hatch in their native river, spend their juvenile life feeding in freshwater and prepare for their long sea migration before returning as adults, usually one year later to mate in their native river. Genetic analysis has shown this loyalty to their native river which can be traced back to the Ice Age.

The COMPASS project has for the first time identified the northward migration route of young salmon from some of Ireland’s east coast rivers, as they start their epic and dangerous journey to their feeding grounds in the North Atlantic Sea. Research results like these offer insights which will enable policy makers and managers to focus actions aimed at the protection and conservation of Ireland’s iconic salmon stocks, which have suffered considerable decline over the past decades. Inland Fisheries Ireland will continue in its research efforts, nationally and internationally, to support the conservation of our salmon stocks which are threatened by current and increasing threats posed by a changing environment.”

Dr Robert Rosell, Principal Scientific Officer for freshwater fish at AFBI said: These observations are an exciting first for long distance tracking of individual young salmon at sea. We are now in a position to carry out follow up studies to find out much more. These results will optimise the placement of further detection equipment and add information, for instance on survival rates, for further releases of tagged fish. Now that we know where to look, advancing technology and longer battery life tags may soon give us not just the outward journey, but also detail of the routes taken by adult fish coming back to spawn.

Pike have been confirmed in Aughrusbeg Lough,...